In just a few days’ time, the busiest 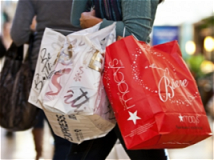 shopping day of the year will send millions
of Americans to camp out in front of stores
and pick apart aisles to get the best
possible deals on holiday gifts.

Last year proved to be one
of the strongest Black Fridays

in the history of American retail, with the National Retail
Association reporting nearly 250 million shoppers spent nearly $60 billion.
Just because great deals exist, does not mean you should buy them.
Here are some of the things you should skip over
come the day after Thanksgiving:

Parents may want to get their kids the big-name toy to open up
under the tree, but the statistics show that toy prices
actually fall in the week or two prior to the holidays. DealNews
reported that the cost of toys drops by as much as 37 percent in
December compared to their prices prior to, and during, Black Friday.
Unless a particularly rare toy catches your eye, do the shopping for kids later.

This Black Friday may represent the largest sales of video game
consoles in recorded history, as both the Microsoft Xbox One and
the Sony Playstation 4 hit shelves within days of each other.

IGN reported that Sony Computers president Andrew House believes
his company will sell no less than five million consoles prior
to the start of the fiscal year in 2014. Whether this projection
comes to light or not, video game companies try to ramp up their
sales in December by bundling together the console with games or
controllers, giving you more bang for your buck if you sit tight on Black Friday.

Clothes usually account for the most-exchanged gift over the holidays,
since they represent an easy solution for anyone on your shopping list,
regardless of age, gender, or interests. Winter clothes, however, hit
their lowest price tag towards the end of winter itself, when retailers
put their inventory on clearance to make room for warmer-weather outfits.
For Black Friday shoppers, purchasing warmer-weather clothing or shoes
at retail stores like Macy’s
represents a much greater venue for saving money. Better still,
you avoid many of the crowds and commotions
by browsing non-winter or non-seasonal clothes racks.

Just as you can find cheaper Halloween candy the day after Halloween, so too do
the prices for Christmas trees, wreathes, ornaments, lawn statues, and lights
fall the closer you get to the big day itself. It can be tempting to buy Christmas
decorations while you shop on Black Friday and get all of the holiday-related
spending out of the way, but the longer you wait, the more savings you accrue.

Gift Baskets and Shipped Food
You can purchase everything from a 44-ounce porterhouse to a bottle of champagne
if you shop on Black Friday, but the cost of food gifts peak when millions
of shoppers congregate to find present ideas. Gift basket value drops up to
and after Christmas, but don’t wait too long, since the price tags rocket
back up in January, when Valentine’s Day draws a whole new round of spending.